The Broken Spoke was treated to a delightful and bizarre reinterpretation of Alice’s Adventures in Wonderland last week, a performance so strange and novel that the smile on my face didn’t disappear for at least 13.76 hours.

It all started when Sam, Elle, myself, and my friend Johnny gathered in the courtyard with about 30 other unsuspecting audience members. Quite unexpectedly, a large woman dressed as a bizarre bird of paradise called to us from around the corner and a man dressed as a white rabbit pulled Elle and Sam away through another door. We had become part of Alice’s Resistance Front or the Alice Team Against the Queen of Hearts, or some other name that would have struck fear into the Queen of Hearts’ very own, er, heart.

In a topsy-turvey and whack-a-doodle jaunt around the Story Museum we witnessed fun, creative, and often creepy reinterpretations of scenes from Alice and Wonderland. What better way to spend lunch hour than playing human croquet with the Queen, and enjoying buttered toast with a Mad Hatter-ess? 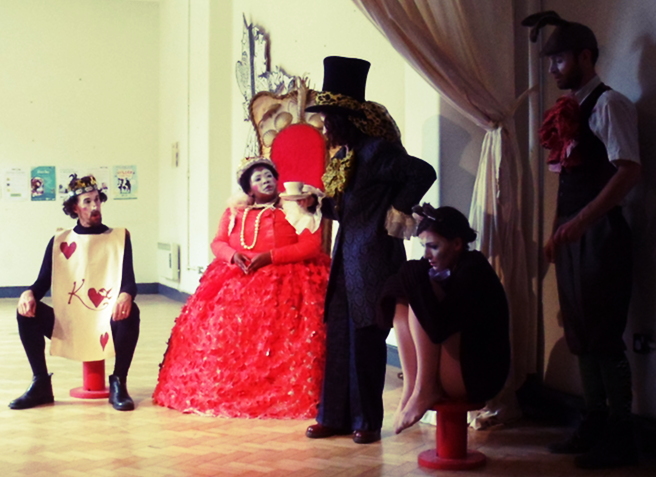 In response to the riddle “Why is a raven like a writing desk”, I found the following answer:

“Enquiries have been so often addressed to me, as to whether any answer to the Hatter’s Riddle can be imagined, that I may as well put on record here what seems to me to be a fairly appropriate answer, viz: “Because it can produce a few notes, tho they are very flat; and it is nevar put with the wrong end in front!” This, however, is merely an afterthought; the Riddle as originally invented, had no answer at all.” – Lewis Carroll

But you must be wondering: what does all this have to do with bikes?

Apart from the fact that bikes are also nevar put with the wrong end in front, or they’d be very difficult to ride indeed.