Hello Broken Spoke Blog readers! I’m Kate, and I’ve recently signed up to be a volunteer blogger for this site. I didn’t think cycling was important to me, until I had my bike wheels stolen and it left me feeling as though somebody had taken away my legs. Here’s a story about that.

What is a bicycle? A frame and a pair of wheels? A method of getting from point A to point B?

To me, a bicycle is freedom. Freedom that I’d taken for granted until one day a couple of months ago when I returned home from a weekend away to see only part of my bike locked to the lamp post where I had left it. Thieves had taken both my wheels, leaving a sad looking slightly rusted frame. 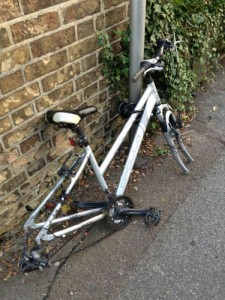 The bike wasn’t worth much. It was Halford’s cheapest option, eight years ago when I first started at university and didn’t know anything about cycling (or about life for that matter). In fact, I still don’t know anything much about bicycle maintenance. My eight year old bike had been severely neglected, left out in the rain, never oiled and barely washed. My housemate concluded that buying replacement wheels would cost more that the whole thing was worth, so I unlocked the frame (which disappeared about two hours later).

The following week was one of frustration. Frustration at waiting for the bus that should have arrived ten minutes ago, frustration at the walk home that was taking so long, frustration at having to carry heavy shopping bags that would otherwise have been in a basket. I felt so held back by the extra time it took to get places and by being at the mercy of the Oxford Bus Company.

Now I’m back in the saddle, and it’s incredible. Right the first ride on my new bike when I’d felt the wind against my face. I was moving so fast!

I vowed never to take cycling for granted again. This time, I’m going to learn to look after my bike properly, keep it safe, and use it more than ever. Like Carlene Thomas-Bailey I can barely identify a pump. But with the help of Broken Spoke, I’m going to become an expert. Watch this space.