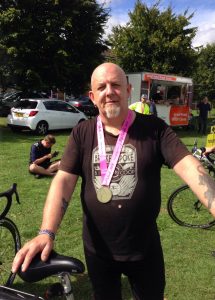 Hi my name is Dave and I have a short story to tell you about how I started at Broken Spoke.

I went to Crisis Skylight in Oxford and I did a bike maintenance course. That’s how I met Elle who runs Broken Spoke.

I have mended bikes since I was a young boy so I have always been interested in them and already knew quite a lot about bikes anyway.

When I finished the course, Elle and the staff at Crisis asked if I would like to become a volunteer at Broken Spoke. I was really pleased to be asked and that’s how I got started.

At Broken spoke with Elle and all the other staff they have become my friends. I have been there since 2013 shortly after the project started.

I have done a lot of woodwork and I like teaching people to mend their bikes. It is good to give that knowledge to other people and the atmosphere is great in the workshop.

I was talking to the volunteers who were telling me about the cycling groups in Oxford. I decided to build my own bike from scratch using secondhand parts. When I finished it I was really pleased with it and I decided to take part in Bike Oxford 2016. I did the 25 mile route for charity and I really enjoyed it. Broken Spoke is the best thing I have ever done and I enjoy it very much.

I would definitely recommend getting involved in Broken Spoke to other people. It has given me so much enjoyment, helped my confidence and I really feel part of something important.

Dave is still volunteering in the workshop every week and is looking for more 25 mile rides to join – so let us know if you hear of any!