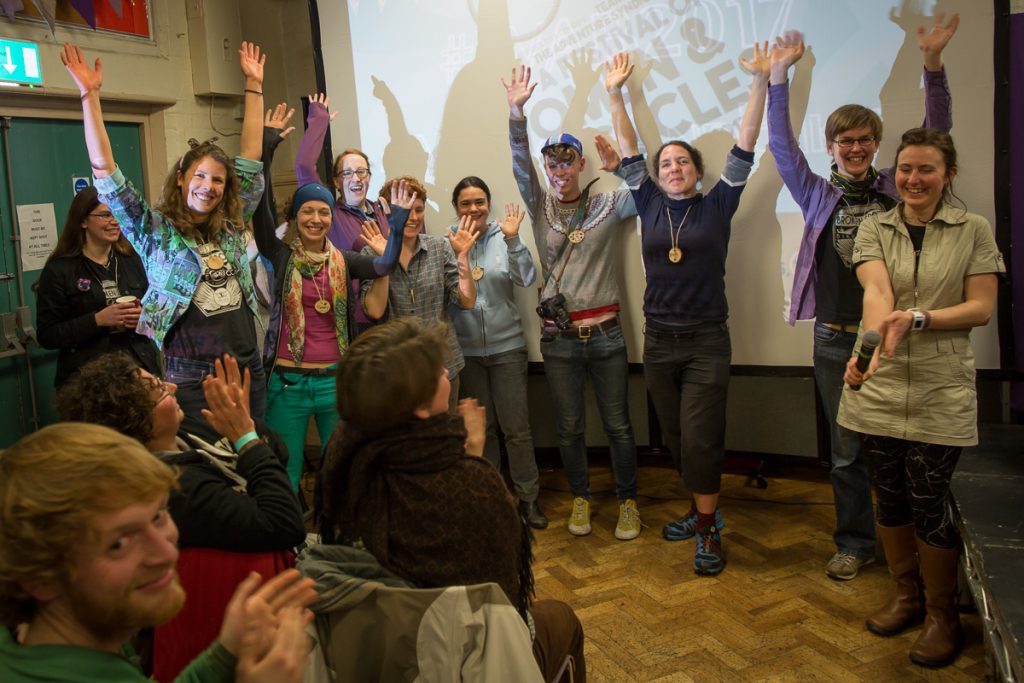 Celebration doesn’t come easy to me. I’m usually like ‘Done. What’s next?’

I’m determined to change that, because I have recently learnt how important it is to celebrate. And that is why today, on International Women’s Day, I want to celebrate the women who made Women & Bicycles 2017 happen. Let me introduce you to all of those you see in this picture on the right (including myself) and I will do my best to give you an insight into their contribution to this extraordinary, inspiring and energising event last weekend. 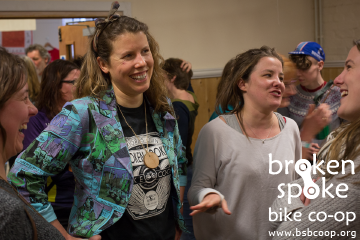 Elle is a founder and director of the Broken Spoke Bike Co-op, a bike mechanic and one of the most patient teachers I’ve ever met. She has loads of experience as a touring cyclist and loves riding the Dunwich Dynamo (London to Dunwich over night) every summer.
Starting in June last year, she worked tirelessly with Karen and Emily to pull this event out of the ground and shape it into something a larger team could work with. Next to managing the budget and seeking external funding, Elle was our event manager, coordinating the energy of the rest of the team especially throughout the last five months of organising. She made sure that anything that was at risk of falling through the cracks got picked up by someone. And this continued at the event, where Elle was our operations manager, making sure that everything ran as smoothly as it could – as well as waving the flag for female mechanics by running the ‘Fix a flat’ workshop and taking part in Cafe over-share. Without Elle there wouldn’t have been an event.

Karen is a volunteer at the Broken Spoke Bike Co-op, a member of Team Beryl and the Board of Directors. She is a reliable force in the open workshop sessions at the Co-op and also enjoys long distance cycling – last year we did the Dorset Dash together (Oxford to the Dorset coast overnight) and she took part in the Adventure Syndicate’s ‘North Coast 500 in 8 days’-ride.
With Elle and Emily she put her energy into making W&B 2017 happen since June last year and worked with them to seek external funding. She was our venue and workshare volunteer co-ordinator and co-hosted the event with myself and Emily. Without Karen we wouldn’t have had any venue or workshare volunteers. 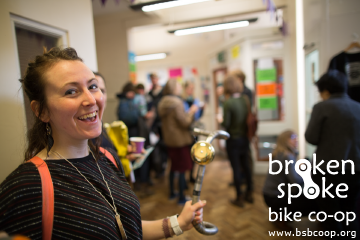 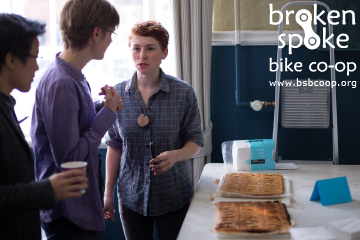 Caitlin came to Women & Bikes last year as an attendee and subsequently went cycle touring in France that very summer. On her return she became a volunteer at the Broken Spoke Bike Co-op and brightens up the Friday DIY workshop sessions ever since.
Caitlin was our catering co-ordinator and driver, collecting food from all over Oxford for our chefs Audrey and Miranda to magic into the most delicious meals. When her internship ended in December she was able to devote even more time to helping organise the event, including writing an article for the ‘On yer bike’ column and spending endless hours with Elle and Karen developing an operational plan, ironing out the creases that started showing subsequently. Without Caitlin we wouldn’t have had anything to eat or drink, no AV equipment and potentially no Elle.

Emily is a founder and director of the Adventure Syndicate, long distance cyclist, famous blogger, former London cycle courier and author. She likes to challenge herself and others to expand their perception of what they are capable of. She is also the big sister of Sam Chappell, fellow Broken Spoke director of Elle and me, who himself is an extraordinary bike mechanic, cycling instructor and inspiring teacher.
As our programme coordinator, Emily used her networks to find and bring together a fabulous cast of speakers, panelists and workshop leaders for our event. She also made sure that we’d get the word out into the world, writing and disseminating press releases and tweeting away as if there was no tomorrow. Emily co-hosted the event with Karen and myself as well as chairing the panel on ‘Making space for women in cycling’, the Q&A session with our keynote speaker Rickie Cotter, and the panel ‘Making the North Coast 500 Happen’. Without Emily we wouldn’t have had the awesome programme or attendees that we had. 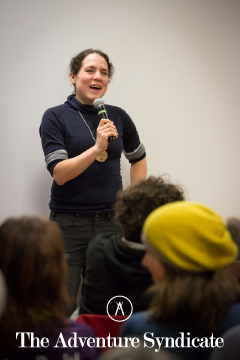 Cat’s first contact with Broken Spoke was as a customer – she bought a lovingly refurbished and quite unusual fixie, that she still loves riding today. She soon started coming to Beryl’s Night, became a volunteer, joined Team Beryl and is now a reliable knowledge base in the workshop.
Cat has coordinated the Sunday morning rides and co-managed the whole sign up system for the rides and workshops before and during the event. When she wasn’t busy doing that, she documented the event in pictures with her camera. Without Cat there would have been no rides, and workshop/ride signups would have descended into chaos. 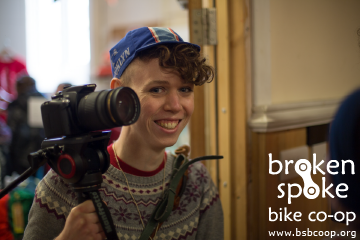 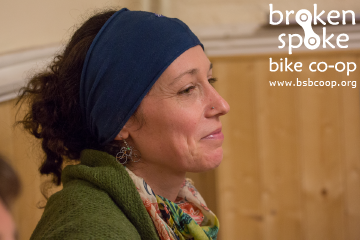 Kerry is a volunteer at the Broken Spoke Bike Co-op and she says of herself that she loves communicating with people. What better role could she pick than responding to incoming email enquiries and chasing attendees at the event with her four dictaphones to record their stories, responses and experiences? She also used her car to transport lots of stuff from her workplace (The Earth Trust) and from the Broken Spoke workshop to the venue and back. Not to forget her share in making the essential bunting for decorating the venue and the hours and hours she spent on making the elaborately decorated prize cake for the attendee who cycled the furthest to get to the event. Without Kerry no one would have answered email enquiries, we wouldn’t have had an amazing cake prize, a-frames from the Earth Trust, bunting, printed programmes, fairy lights, … 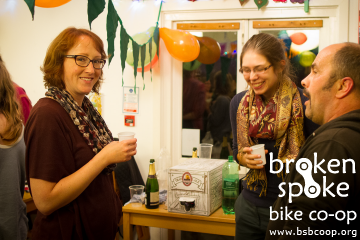 Calista has been a volunteer at the Broken Spoke Bike Co-op since the very beginning, she is a member of Team Beryl as well as the Board of Directors. She has been instrumental in strengthening the connection and collaboration between Broken Spoke and the Cowley Road Condors and has recently expanded her bicycling experience into the off-road terrain through the acquisition of a mountain bike.
Prior to the event she has fulfilled the role of ticket sales manager and played a big part in setting up workshop and ride sign ups. She therefore naturally progressed into co-ordinating attendee registration at the event, while also supporting the staffing of the merchandise stall. Without Calista we wouldn’t have had any attendees in the venue or sold any books or merchandise.

AK is a volunteer at the Broken Spoke Bike Co-op and owner of, as far as I remember, seven bikes, some of which she’s given to friends on long term loan. AK was heavily involved in turning a boring community centre into a festival venue of women and bicycles and was the creative force behind the transformation of the community centre lounge into a dreamy space for our Saturday social. Without her, there would have been no balloons, no bunting, no colourful bike wheels and no one to switch between slides or play the films. 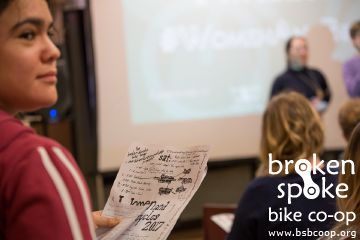 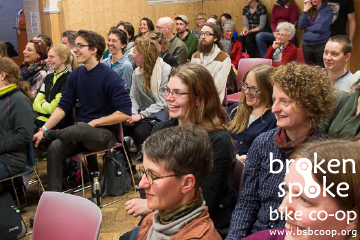 Steph is a volunteer at the Broken Spoke Bike Co-op and knows her Sturmey Archer AW hub inside out. I think she could probably rebuild it blindfolded. Due to her self-funded hobby of making and selling stuffed ponies, she also knows her sewing machine inside out. She was therefore predestined to join the decorations team, making bunting, and together with AK turning the community centre into the festive venue it was over the weekend. Without Steph, the venue would have looked a lot less fun and interesting.

I am a director of the Broken Spoke Bike Co-op, a bike mechanic and trainee cycling instructor. As Broken Spoke’s graphic designer, I have created the posters and flyers for last year’s and this year’s event. I have also created the event related pages on the Broken Spoke website. I have played a part in managing workshop and ride sign ups, sending out emails to attendees as well as providing organisational and moral support. I co-hosted the event with Karen and Emily, provided AV support, moved a piano and lots of chairs and did my best to support Elle and Caitlin in making sure everything was running asap (as smooth as possible). 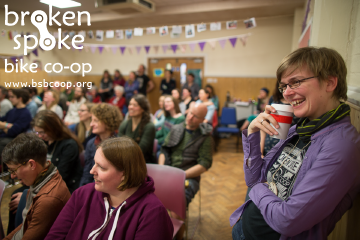 A few people from the organising team are not on the photo at the top of this article, and I want to give a shout out to them, too and celebrate their contribution to the event: Verity Ashton helped with pre-event communications, as well as registration support. Camen Lei and Agne Milukaite helped staff the merch stall. Kat Young helped with pre-event social media and Cassandra Frey-Mills supported us with lots of pro advice on how to organise an event and helped with seating, social media and staffing our merch stall/info desk over the weekend.

Nine months in the making, Women & Bicycles 2017 was an epic undertaking for a small group of determined women. I think we have learned many things, one of them how much it takes to organise and execute such a successful event.

I hope that the energy we’ve brought to it has seeped into everyone who came and is now taken out into the world to be shared and built upon.

A note to the team: Thank you to all of you for being the awesome women that you are! If you think that your contribution has in any way been misrepresented here, then I would really like to know and am willing to change this post so as to better represent you.