Over the next few months we’re going to introduce some of the great people involved with Broken Spoke, finding out what gets their wheels turning and keeps their freewheels ticking. First up, Elle!

Position, or involvement with Broken Spoke

I really felt that there was a need in Oxford for a public bike workshop for people to learn and be able to repair their bikes, so that they don’t get stopped from cycling by fear, or by minor broken bicycle issues that are easily sorted. Bikes need ongoing maintenance, and its not practical to always pay somebody else to do that. My experience was that in Oxford – with its housing crisis, and people not always having a lot of space, for a lot of people it’s not always practical to do this at home. You can get info from the books and the internet at home, but not the tools and the space.

I don’t think I remember my first bike – I think I’ve always had one. I do remember my first road bike though – that was the first time that I really realised that you can really go places by pedal power! It was my Dad’s old bike – a Dawes from around the 1970s, it actually had a really nice groupset, though I didn’t realise at the time and most of it wasn’t working. I used to cycle it from where I lived in East London over the Bow flyover into the centre of London, all the way in one gear because I hadn’t worked out how to use downtube shifters. And that was how I first got into cycling. 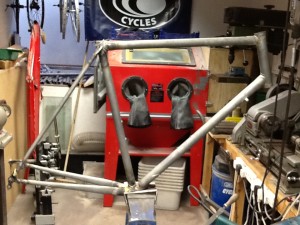 I own parts of it already! I built a frame this year, it’s a steel racing frame – the fact it’s steel means that I could build it myself, it’s going to last a long time, and the geometry fits my body. It’s also got no logos (don’t want my bike being anyones billboard). I’m going to build it up with hand picked parts – when I have the money..! At the moment it’s just a frame. It’s got my grandparents name on the side of it, because they died last year, and that’s when I made it – I wanted to make it a tribute to them.

It’s FIP radio – Radio France – the presenters have got beautiful French voices, play lots of jazz and other off-beat music plus you only pick up half the news so you don’t have to get very gloomy about the state of the world. The only problem is that they’ve been on strike recently so it’s just been a playlist and a recorded message. We were just down in Bristol for Bespoked the handbuilt bike show, and talking to folks from Bristol Bike Project, turns out they love FIP too, seems to be popular with bike mechanics.

If I’m on my own though, I’ll put on podcasts – This American Life, that sort of thing, and I can do that for hours and hours. 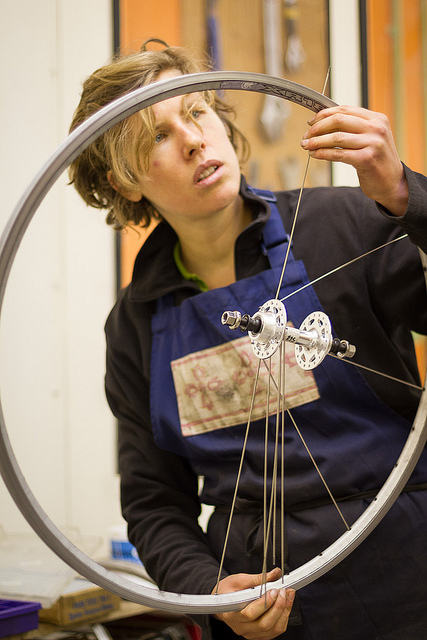 I find the most satisfying is removing really stuck stuff, when a bike is in a terrible state. It’s problem solving – you have to be inventive about how to get things free, and if you manage it, the bike goes from being dead, to a state where you can start trying to fix it, and that is really satisfying.

On the other end of the scale, I really enjoy wheel-building, when I have the time, because then you actually make something, more so than anything else in the bikes world other than frame-building.

I don’t get so much out of working with expensive groupsets and parts, because I find them a bit stressful, less hackable. I like that much of bike technology is open source but there are moves away from this at the top end of the market and that doesn’t sit well with me. Expensive parts require the mechanic to be very precise and refer to the instructions a lot – you have to follow someone else’s steps, in the way that they think makes sense, rather than starting from a place where you’re just like “well this is what I want to achieve, so let’s come up with some ideas!” That feels more creative, you use your mind and hands.

Luckily it doesn’t come up much in this job – we’re much more old-school, and I like the challenge of working with the old weird stuff – we work on bikes that people ride around every day – where the bikes are part of people’s lifestyle.

I think my favourite one is the Dunwich Dynamo! I just love doing it every year – ever since I found out about it, about two days before it was due to happen, someone said we’re going to cycle 120 miles overnight to the coast and I said “okay, I’m just going to clear my schedule and do that!”

Its weird, but really good fun, riding along in the dark with thousands of others in the middle of the night, going on a genuinely long ride. There are also really cute homemade stalls along the way, where people who live on the route sell coffee and egg sandwiches. And then arriving on the beach and being able to go for a swim in the sea, at 6am, joy!

And what would be your top tip for someone starting out?

I think the main thing is to not allow preconceptions or fear stop you just taking that initial, really really difficult step of getting yourself to the workshop. It’s like your first run after not doing it for ages – it’s hard to go, but once you’re doing it, it’s easier than you imagine, and it opens lots of doorways – you’ve got that bit more knowledge, and you can come back when you need to.

Variety – though that’s also what keeps it interesting. The main challenge for mechanics at the moment is the way that manufacturers keep trying to best each other by producing variations of incompatible components, with different sizing for instance. At the other end of the scale of course, you’ve got the problem of really cheap mass produced bikes – obviously this is part of a global problem, and relies on cheap labour and high resource use, but people buy a very cheap bike, and it doesn’t ride very well, and then it breaks and is hard to fix – and so you have the experience that cycling isn’t fun and bikes are difficult to fix – both of which aren’t true!

I’ve done the Paris one, and the Oxford one, and obviously they’re very different – the Paris one is so big that it feels very safe and fun – I have lots of fun on the Oxford one as well – but it is smaller, so you feel a bit more vulnerable. But they’re very important – we need to reimagine what our streets are for – at the moment, they are currently very dominated by cars, so the assumption is that the fastest and mightiest has right of way, but once a month we can demonstrate a different way of using road space – where maybe the cars aren’t going so fast, but where maybe that’s okay, because the street is a nicer place to be!