Every month or so, we are introducing some of the great people involved with Broken Spoke, finding out what gets their wheels turning and keeps their freewheels ticking. Up this month – Sam! 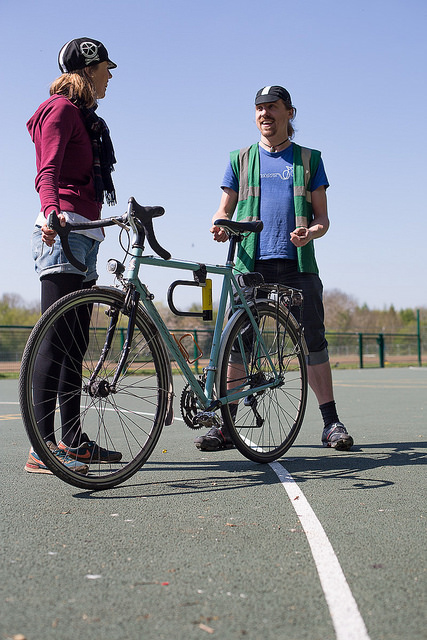 Position, or involvement with Broken Spoke?

Cycle training coordinator, one of the directors and workshop mechanic.

I moved to Oxford for work and heard about this cool bike project and wanted to volunteer. I wrote an email saying I really felt resonance with the cooperative model, and workers having a democratic say in how the business is run. I’d always worked for people, and had a boss, and what the boss says goes. Most of the time, that’s fine, but there’s less decision making that you’re involved in, you feel like you have a less important point of view. So that was my first contact, an email saying ‘respect to your cooperative beginnings’!

My first bike when I was a kid was a hand-me-down from my sister, it had stabilisers and I think it was red, white and black. The most important thing about it was that it had two wheels – I got really nervous about that, but I loved the stabilisers. I think after that I had a BMX, a bike that threw me off and gave me stitches in my head when I was about 5. I was chuffed to bits that I’d got a scar from riding a bike!

But my first proper bike, that I appreciated and loved was an old blue, unbranded road bike that my sister bought me for 30 quid, and I think I still owe her that 30 quid, but that was the bike that got me into cycling. So nothing special, until I actually got into it…

Too many… I want a super-light road bike. If money was no object then I’d want a carbon-fibre road bike, not with disc brakes, not with electronic gears, something still mechanical. But my other dream bike is a custom made steel road bike… Or is it a touring bike?

Maybe one that I’ve made myself, or one I know has been over-built so I know it’ll never break. It’d need to be loaded up, and be able to carry my weight again in luggage. And it would have to be green.

I’m happiest when there’s jazz on. It depends on the vibe in the workshop. If it’s a quiet workshop then something to match – Thelonius Monk, or Ahmad Jamal, a bit of Miles Davis… But if it’s a busy workshop, if I had it my way, then I’d put on some jazz-punk, because that is really exciting, energetic.

But a lot of people don’t really get on with that, so I often have to go towards my other tastes, often 80s classics. I don’t know if jazz and bikes exist together well, but I’m a jazz musician as well as a bike mechanic. I’ve never incorporated jazz music into cycling… If only there were more hours in the day… 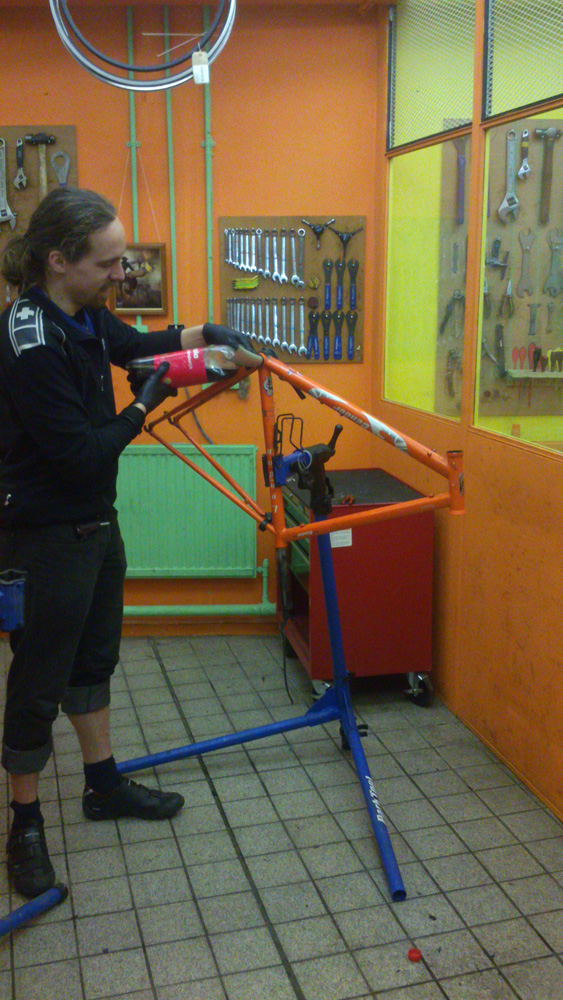 Wheel building’s my favourite thing, because I can do it well. I’m comfortable with it, and it’s really relaxing. There’s also loads of stuff I don’t know about it, and loads of dynamics in a wheel that I just can’t wrap my head around, or haven’t thought about, or haven’t begun to comprehend. So it feels like one of those topics that can keep giving.

There’s nothing more satisfying than applying all your techniques to get out a stuck bottom bracket, and you’ve tried every single technique, and then the last one works, and with a huge amount of pulling or pushing the thing finally becomes free and comes out, and there is a great sense of achievement. That’s my second favourite fix.

I don’t enjoy seeing bikes left to ruin, or ridden to destruction. Left to fade away. Bike wreckers. I don’t like bike wreckers. There are some people you can have a conversation with, open their mind – ‘look what you are doing here, this is because of you!’ And you can have an effect, and that’s great, but the people who don’t appreciate the mechanical wonder that they’re on top of – when people have lovely bikes that they’ve found and they don’t even know what it is, and it’s been ridden to the ground, and they don’t even care… that’s what I don’t like – trying to get them to do things.

My favourite rides are the long ones – I did used to think that the Dun Run was my favourite ride, but it’s not long enough, so most recently I did it twice, there and back.

Last year, I did a ride from here to Leeds for the Tour de France prologue, and that was a two day-er, two 100-mile days with my sister, it was incredible, it was really good. My favourite bike to ride on a long ride is my fixie.

I did the bottom of Wales to the top of Wales a couple of weeks ago, but I did it with my brother in law, and he was on gears, so I rode gears there – riding on a fixie you’re at a different pace – you’ve got to either peg it up hills, or walk up hills, there’s no in-between option. 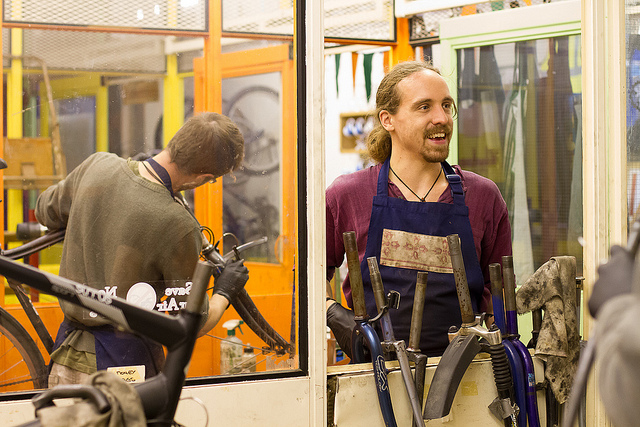 What would be your top tip for someone starting out?

They should really put the money into finding the bike that’s right for them. An extra 100 quid may seem a big amount to lay out, but within a couple of weeks you’d spend that on a bus fare if you weren’t cycling, or on the upkeep of your car… if not more. That extra 100 quid can make a big difference if you’re buying a bike, or kitting out your bike, or getting the gear to wear or to carry with you to support your commuting. Having the right gear makes everything fun. Riding in the rain with the right waterproofs, there’s nothing more satisfying!

It just has to be the lack of space for cycling, the lack of dispensation that’s made for cyclists, both in Oxford and the whole country. It’s really visible in Oxford, the way that bikes and cars are thrown into the same situation all the time, and the antagonism between the two is quite alarming, disconcerting.
I get a massive buzz from cycling wherever, but I know that I’m probably in the top level of cycling enthusiasts. And even in my position I have confrontations with other road users, mainly motorists, and they’re around the same themes – “you’re in my space”, “what are you doing there?”, “I’m more important than you”. If I’m experiencing that then someone new to cycling, someone nervous, they’re going to be dissuaded from cycling, they’re going to feel like, “I should cycle, but it’s a relief not to have to put up with all the grief”. So that’s the biggest problem for cycling in this country – particularly in the urban areas.

Don’t get me wrong, I love critical mass, it’s a lovely moment when the roads are full of bikes and the cars are all having to wait behind, because it’s so often that bikes are held up by cars. It’s just great to have those positions reversed, and because bikes take up less space, the roads are clearer, they’re empty, and you can talk and you can interact, and you can ride three next to each other, and everyone can laugh and joke and have a great time.

That’s what the streets should be like, and that’s what critical mass creates, but I don’t think that by itself it’s able to solve the problems that cyclists face – it has to be coupled with a more positive campaign. 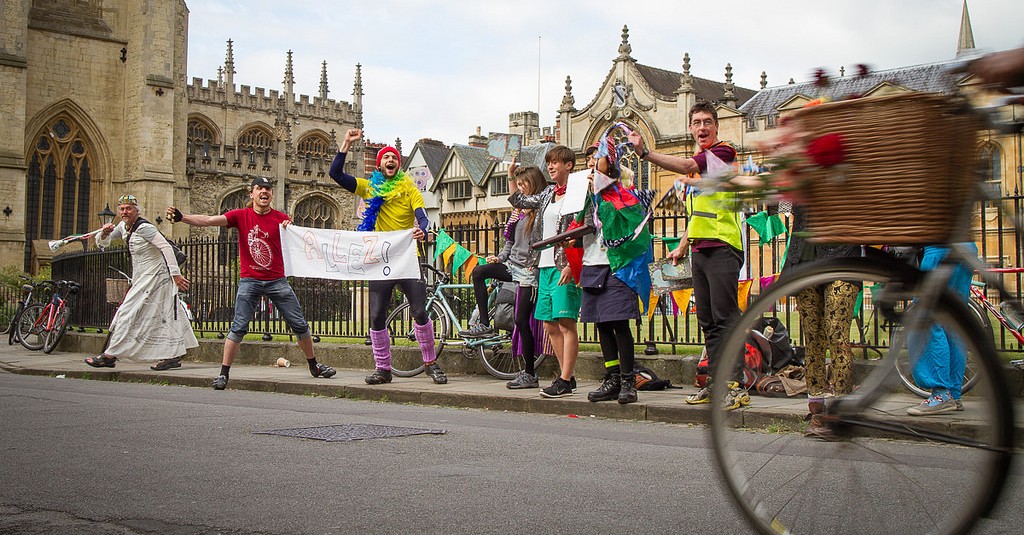