Broken Spoke at Pride, and the continuing love story of bikes and their queers 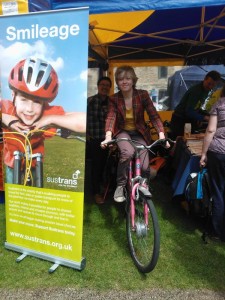 Aurore cycling up a smoothie on our bike-powered blender-bike! Broken Spoke volunteer and Team Beryl member, Camen Lei, in background.

Broken Spoke Bike Co-op was at Oxford Pride on June 6th. It was a blast!

We shared a booth with our friends at Sustrans, and passed out loads of pamphlets to the good queers and queer-allies of Oxford. We unloaded dozens and dozens of Beryl’s Night flyers and we hope to see many of your shining faces at our monthly women and trans-* Beryl’s Night!

The Broken Spoke Bike Co-op is a queer-friendly space, and we are conscious of making it even more so all the time. That’s why I wanted to put together this little post-Pride… er… post to reflect on a part of bike co-ops that has long seemed a bit of a wonderful, if unsolved, mystery to me.

Tatt of a seahorse on a penny-farthing courtesy of my friend Rachel Small, ink by Rachelle Gammon, Halifax (Canada)

While bike co-op spaces I’ve worked in don’t always explicitly say that they’re a cool place for queers to hang and be awesome, I’ve always known that to be true. I’ve always just got the sense that queers and gears get on. Without a doubt, in my mind anyway, the bike co-op is a perfectly legitimate place to stage a first date with that okc cutie, and ‘bike mechanics’ is a highly marketable skill-set in certain (read: queer) dating circles. And, as they say, ‘a woman needs a man like a seahorse needs a penny-farthing’!

So, why are queers drawn to bike co-ops? As we strive to make our space queer-friendly and empowering for women and trans-folk, this is an important question to keep in mind.

Let’s have a think…

Co-ops drive forwards with a riotous sense of precarity and dynamicism, I suppose from being consistently under-staffed, near-capacity, and busy. Maybe that’s what creates a queer-friendly space. (What queer can’t relate to precarity?) Women in dirty workshop gear teaching lanky young Uni dudes how to open up their bottom bracket, gentle, conscientious men volunteering to wash up the tea cups at day’s end, and queer couples celebrating Valentine’s day by fixing up a city bike for her, since she already has a cruiser. Bike co-ops are often, if not usually, ‘gay friendly’ places, but it’s more than just that. I suspect that part of the queer-friendliness is the familiarity that queers have with the subversive. Living a life and being queer is itself an inevitable act of subversion of heteronormative life scripts. 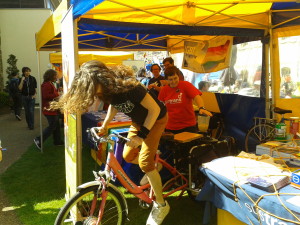 Johnny from Broken Spoke and Liz from Sustrans demonstrate the precarity of queer-dom and bike mechanics with this smoothies-making adventure!

Bikes are a subversive way of moving through cities, wherein urban infrastructure was long ago converted to suit the car. As a cyclist, the city infrastructure is not really for you, and using the space for a cycle when it was designed for a single-family vehicle is necessarily a perversion of the transport script. The practice of bike mechanics, too, has a subversive bent. Working on bikes cuts through class and age; it counters the de-skilling of an information technology-savvy society lacking general mechanical know-how.

And of course, women and trans-peoples working in mechanics grates against the grain of gender roles that are traditionally rigidly mapped onto dualistic categories of man and woman, and excluding non-cis-men from mechanical-skill learning opportunities.

You can recycle parts of other bike, mend your bike yourself and make something beautiful — a craft, piece of art, or a practical item like a bike stand or trailer — from re-using bits of old bikes. Working with bikes happens from within the mainstream economy, but bike co-ops also facilitate the lateral movement of goods, and promote significant recycling. Yup, I am arguing that bike co-ops mess with, if not outright subvert, capitalism. Bikes, and specifically DIY bike co-ops are spaces embedded in a counter-culture with a subversive bent that implicitly messes with hyper-consumerist capitalism drives, car-centric urban planning, and gender roles, and — this isn’t science, but I’m tabling it nonetheless — queers can relate to subversive spaces, and feel safe(r) in counter-culture communities. 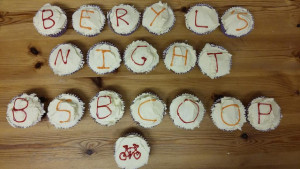 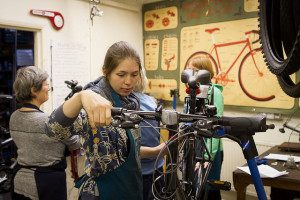 News-flash, you can be both a talented cupcake-icer and still rock out mechanically on bikes! Kat demonstrates…

That means at least two things so far as I can tell for bike co-ops globally. First, that we should be aware that we have an opportunity to ensure that our spaces are, and remain, safe for queers, and all members of the LGBTQQIP2A2S

community. We need to take active roles as co-op members in creating and maintaining safety and empowerment. Secondly, that queerness is a source of energy and power for the co-op. Bike co-ops are a natural ally of many community-based projects and building linkages to other queer-friendly and even specifically queer-centric organisations will only make us stronger and more resilient in the communities we live, work, study, and fix bikes in.

The Broken Spoke is a space that is supported and made possible by a tight-knit community of staff and volunteers who are committed to freedom of expression and being, and accessibility in the space. We are committed to providing safe space to gender nonconforming and trans peoples, and to welcoming, supporting the learning, and growing through the contributions of all people not despite their sexuality or gender expression, but because of the many variations possible for both. Differences across the community make us stronger as a co-op as we learn how to be better for more people, queers and allies alike. If you like the work we do and want to support us, you can do that by using the space, either the open workshop or at Beryl’s Night, by contacting us about partnerships you want to be in and projects you think we’d be keen to pursue, by becoming a supporter or volunteer, and by supporting our learning as a co-op with your valuable feedback. Our goal is to make the space usable and empowering for all, so you are encouraged to tell us at Team Beryl how we can make that happen better for you! 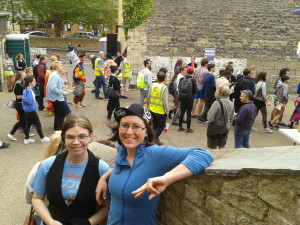 Team Beryl members Steph and I in front of the official Pride March through the castle complex.

With no further ado: See you next year at Pride, and hopefully sooner!!

Credit for idea development and constructive feedback on early versions of this post go to thought-provoking conversations with my bike-savvy, Toronto-queer-community-based friends Rachel Small and Jo Jefferson, and members of Team Beryl.

* We’ve had questions from some folks about who was welcome at our Beryl’s Night evenings from trans- and gender non-conforming community members and their allies. Women and trans- is our imperfect shorthand for ‘non-cis man’. We have deliberated over our use of language, and expect to continue deliberations! Please do get in touch if you have feedback or suggestions re: inclusive language use, we welcome your feedback and help as we try to get this evening right. As well, if you’re a non-cis man but don’t feel like women or trans- applies to you either, please do not hesitate: PLEASE COME BECAUSE WE WANT YOU THERE! 😀