On Sunday I had the divine pleasure of attending a new course at the Broken Spoke Bike Co-op (a perk of the job: taking courses that are hosted by us!). We invited the incomparable Tom Martin from London to teach us about Sturmey Archer hub gears, and it might have been one of the best classes I’ve taken since high school sex ed.

The whole idea of the course was to explore teaching methodologies and learning through the activity of taking apart and reassembling a complicated gear system, while also figuring out the physics of what makes it work. Tom told us at the beginning that he wasn’t actually going to “teach” the course, and that he would be filming us for a chapter of a book that he’s writing (did I feel like a lab rat? Well, no actually. Lab rats would have rebuilt the hub faster than me).

The first step was to take the “guts” out of the wheel itself, and this started with your standard cup/cone disassembly procedure. Then we removed the sprocket circlip (a band of metal that holds the sprocket on), and the sprocket and spacers. The plus side is that no bearings fell out (because they’re in cages), but the downside was…actually there was no downside, I was having fun already.

The guts inside are a complicated little assembly of metal rings and hoops and gears and all sorts of exciting things. There are planets, a sun, a gear ring, and even tiny little springs. Taking all the bits off is the easy part, but things really got interesting when we put it back together.

In teams of two, Tom encouraged us to work through the physics of the Sturmey-Archer hub, asking how and why the shifting mechanism actually works. It was a new experience to be in a class that wasn’t a lecture, because we needed to actually think instead of simply listen. I loved this! It meant that any assumption I made about how the thing worked needed to be defended, and immediately I was able to see the flaws in my reasoning.

The “aha moments” became more frequent, and as we pulled on the springs and flicked bits of metal in and out of their compartments I saw a beautiful picture in my mind begin to emerge: a picture of moving gears, parts working in tandem, physical motion from pedals translating through gears into movement in the wheel. It was so beautifully simple that I couldn’t help but think that the mechanical workings of machinery will outlive the digital hijinks of the current century.

I still can’t put the explanation of the mechanism into words because it’s all happening in my visual brain, but you can find a great semi-psychedelic 1980s explanation here (fast-forward to 3min if you don’t want to watch the funny videos of silly old bikes). 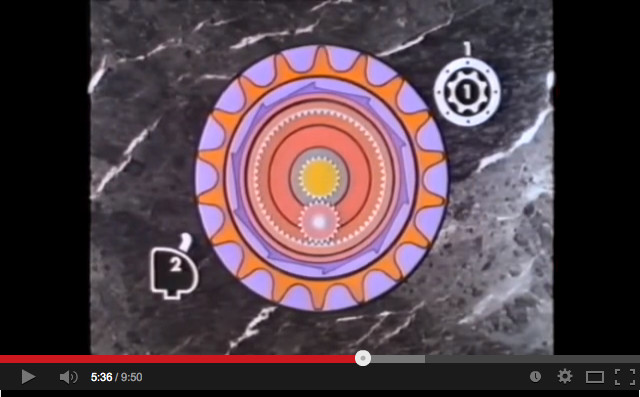 As I rode my 3-speed bike home, the wheels rotated in three dimensions and my mind worked through the process of shifting. The experience was like watching an IMAX movie of a distant solar system in high definition, and realising that you’re surrounded by simple systems that together make up the complex world in which we live.

Thanks, Tom. Now I understand what this picture is all about, and I can’t wait to get back into the workshop and rebuild another hub!