To write about a lost friend when they are so lately lost, feels like trying to collect a broken scatter of staccato thoughts, hurt feelings and wild emotions. I can see how Claudia would suggest a remedy – a nip of a smokey single malt, a long run or ride, and a plunge into a wildlife-filled body of water. 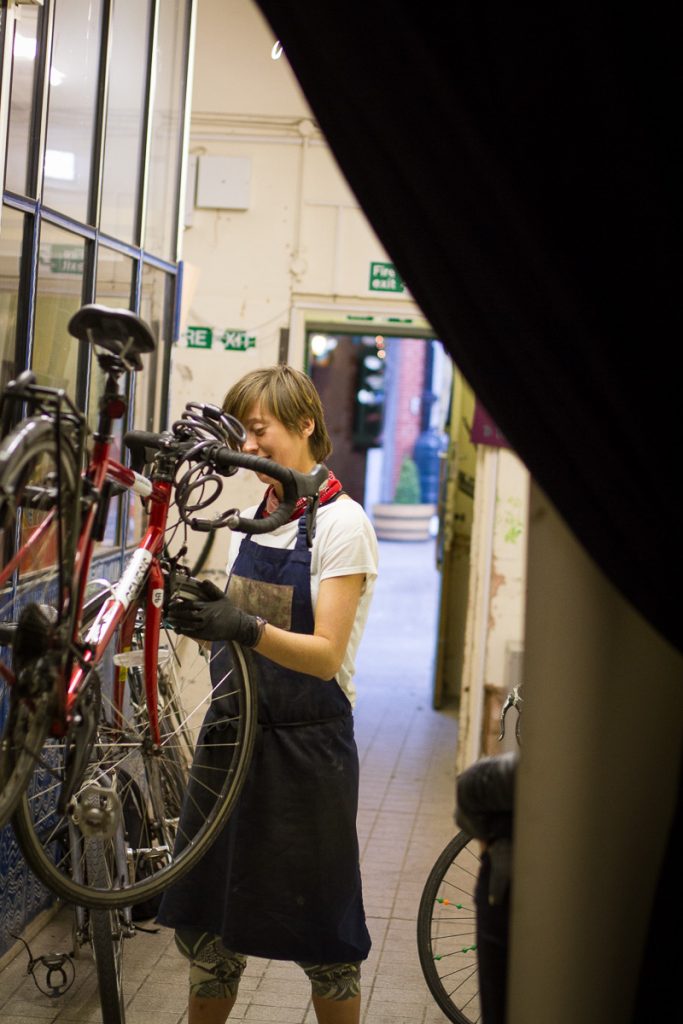 Claudia in the workshop truing her wheel.

Claudia and Broken Spoke were close. Rolling with celebration & glee into life’s challenges, her and her bike were regular faces in our workshop. You’d know when Clauds had arrived by the blur of a bright neck scarf and stripes, and her adored red road bike. The place was reliably brightened every time with her smile and exuberance. Her need to learn coupled with her keenness to share made us a great fit for each other and she helped us through thick and thin, at our Beryl’s Nights, our open workshops, our group rides and more. Perhaps you are one of the many amazing people she brought to the workshop, she had a habit of collecting interesting people around her and get them to try new things (we reaped the benefits of this many times).

On Tuesday afternoon we were phoned by a friend to see if we were alive after the news emerged that a person had been killed by a bus whilst cycling down Botley Road. That in itself is a shocking thing to process.

Our immediate response amongst the bewilderment, was to think of friends that live and work in that area of town and try to find out if they were ok. Even before we knew who had died we decided to create a ghost bike — a bike that is painted white to mark the place where someone lost their life whilst cycling. To act as a memorial, a symbol of their absence, and to make visible the dangers that we face.

Later that day, we learnt that the person killed was our dear friend Claudia. Claudia was a friend to us all at the Spoke, and a much loved member of our community. She embodied that which we try to create and nourish — a love of the world and its people, the outdoors, a zest for life, of living what you believe.

We needed to gather, to grieve, to ride. We invited those who knew Claud to join us in taking her ghost bike to the place where she was killed. At 12pm on Wednesday an overwhelming number of friends showed up at Carfax Tower to ride with us down the Botley Road. We came to express our love, our desperation and our sorrow, to support each other – and to create a safe space that wasn’t available for her.

We formed a procession, a mass ride, we took over the road, we went slowly and safely, people naturally fell into the practice of blocking side roads to ensure the safe passage of the group. In that moment we, the cyclists, in our anger and grief felt safe and powerful. If only this was the rule and not the exception. If only our friend was safe. 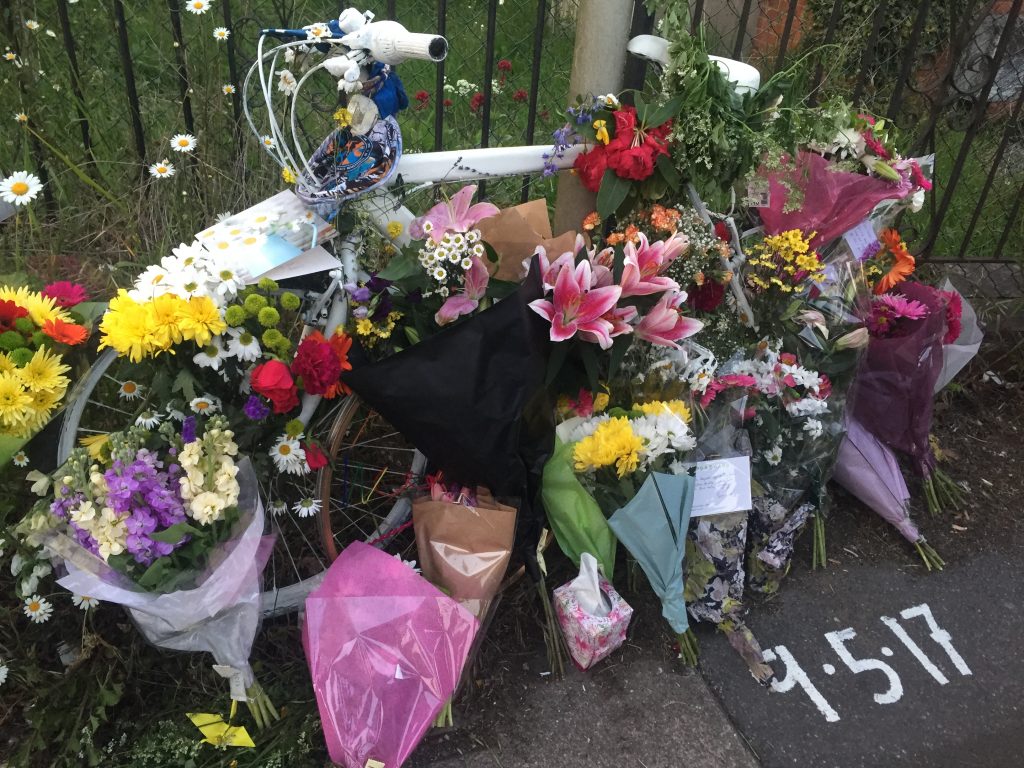 This is bigger than the loss of a friend. The painted white bike is an international symbol of a human being killed on the road while cycling. Now there is one for Claudia. Her bike – presently bedecked with flowers, cards, a neck scarf, a cap – will remain as a marker, a reminder of this violent event.

But the fact is that we should not have lost her; there should not be a ghost bike with her name on it. Everyday those who cycle in Oxford are confronting the structural violence that the roads create. The violence of design and planning that puts our soft and fragile bodies in direct conflict with hard heavy motorised vehicles traveling at speed.

Ten people ghosted Claudia’s white bike down Woodstock Road to Carfax before the procession to Botley, riding two abreast in the centre of the lane as it is safe and legal to do. Unsurprisingly we were met with blaring horns, dangerous overtaking and aggressive comments from people inside vehicles as we rode to commemorate the friend who was killed on the road not 24 hours earlier.

This type of response from drivers is a daily occurrence. This is ‘normal’. We accept this. We all have stories of near-misses, injuries and insults experienced while cycling. The roads are dominated by cars while cyclists are marginalised, abused and even killed. But when the everyday violence of this really hits you, like it hit us when we lost Claud, it is a wake up call.

We create reality; what we expect and accept from the world is what the world becomes. Do we accept that every single main road into Oxford – Abingdon Road, Cowley Road, Banbury Road, Woodstock Road, London Road and Botley Road – fails to protect or prioritise cyclists and pedestrians? Instead they are dominated by the very vehicles which endanger us. Is this what we choose? Cyclists and drivers will always come into conflict until we re-think and re-prioritise.

Regardless of the specific circumstances of Tuesday afternoon, if a cyclist stumbles on the road, just like if a person stumbles on a path, there should be space for them to pick themselves up without being killed. This is our message: cyclists need space, they need to share a wide lane with other bikes not buses which are some of the largest vehicle on the road. No matter how strong a cyclist you are (and Claudia was very strong), you don’t stand a chance against a bus. Buses are not the problem; they are an important alternative to private vehicle use, but they too need their own lane. Private motor vehicles which pollute our air, clog our streets, and cause many thousands of injuries and deaths every year need to be de-prioritised. That’s what park and rides are for. Private cars and vans do not belong on our city’s roads. 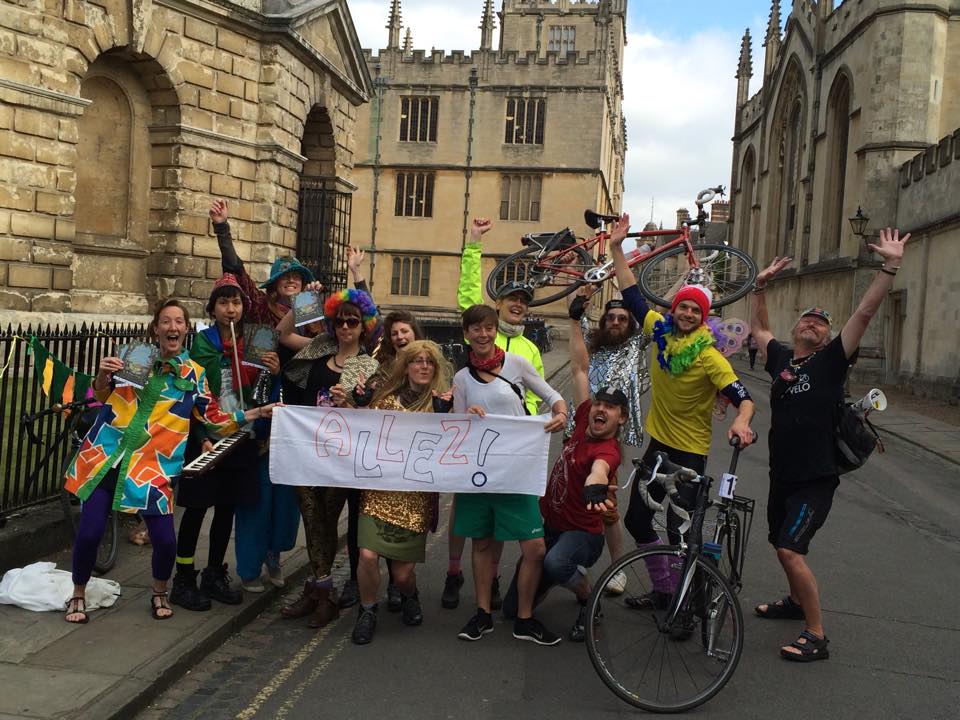 Claudia among friends at ‘Cyclists are heroes’ flash mob.

Claudia was writing up her PhD, she was organising a community festival, she had started swimming in the river already (hard-core!). She relished Oxford in the summer, so she was full of excitement for the coming months. Now her bright future, there for the making, exists only in our imagination.

Her loss is a great one, a deep one and one to which we want to respond with action and love. We choose change, we choose life!

We are asking everyone who feels affected by what has happened, whether you knew Claudia or not, to join us on Broad Street on Friday May 12th at 7pm to ride together – to show the solidarity and strength of our community, to celebrate a life, to imagine better streets, a better city, to take space for people on bikes. And for Claudia.

This will be a vibrant and visible ride. Wear colours and neckerchiefs. Bring things that make sounds, like bells, horns, instruments.

The street can be a living place of human movement and social intercourse, of freedom and spontaneity. Of community. See you on the streets. 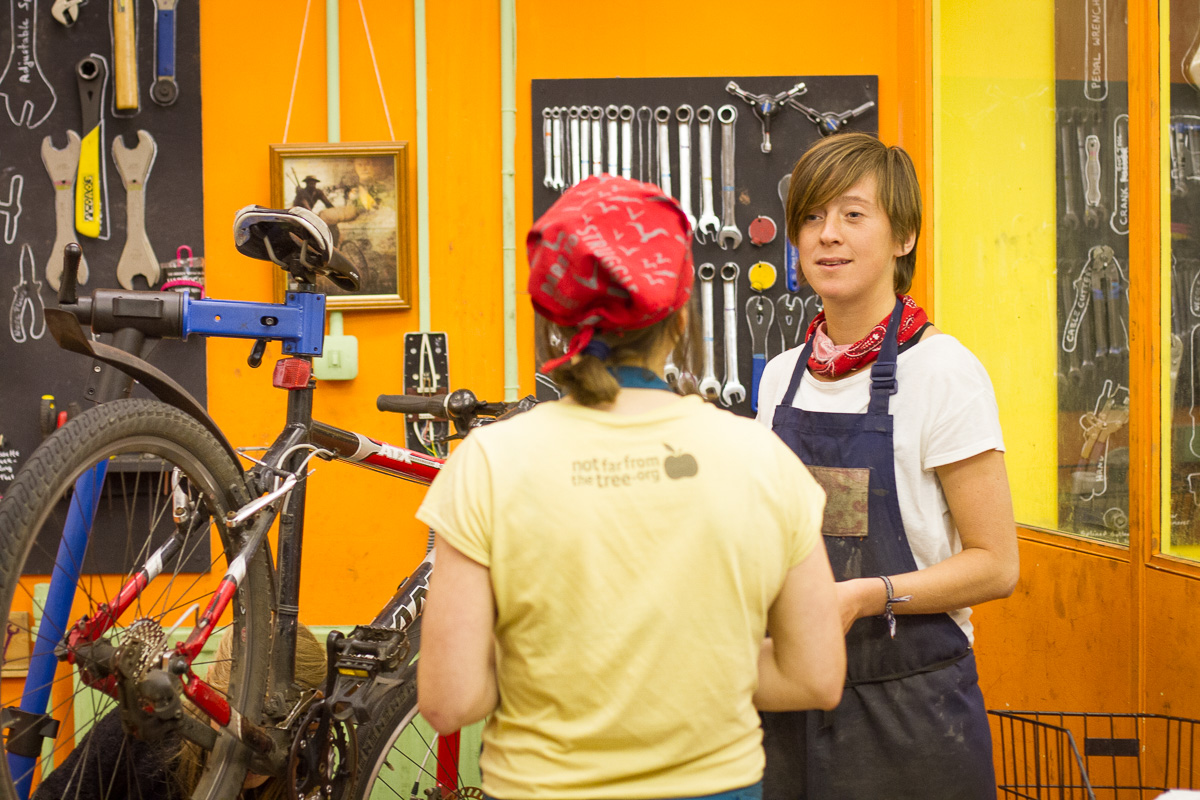