The suffocation of George Floyd and the suffering it caused to Black communities has raised a burning question for white people about how they can be effective allies in an antiracist cause. There are many answers to that question. This blog-post will propose just one. The question should not be, ‘what can I do?’ The question should always be, ‘what can we do?’ The answer to that question will involve acting together in solidarity, sustained over a period of time. Racial justice will require strengthening resistance where it already exists, where there’s experience of fighting a very old and entrenched problem. It will mean transforming almost everything about society, including and especially institutions which are not thought of as traditional sites of resistance — workplaces, homes, minds… anywhere that you have an influence. All of us are bound up in these structures, and all of us can do something about it.

Firstly, though, you might be wondering what bikes and bike projects have to do with antiracist movements. Here are a few of the connections we observed.

The potential of community bike projects to further antiracist struggle 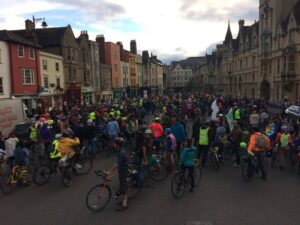 sending volunteers who had experience from Critical Mass rides of negotiating both traffic and relations with the police safely. They also ferried supplies to protesters and distracted police from attempts to kettle protesters.

The background to this is a long history of antiracist demonstration and commemoration through mass rides. Dedicated organisations such as Black Girls Do Bike and Level Up Cycling Movement make space for Black people in the local bike scene. The idea behind cycling rallies is to demonstrate the presence of a group who claim their ‘right to the city’ (Morhayim 2012), having been deprioritised or marginalised from it. This is urgent, as we find out more examples of the hostility and violence Black people face in public spaces. Whereas most urban space prioritises motorised transport, mass cycle rides show how spaces could be transformed to include marginalised users and uses.

The spectacle of the critical mass rides sends a visual message that the city is not just here for vehicles and commerce. It is here to be lived in and enjoyed by people on bikes, and for political protest. At the same time, dealing with cars is necessary. By providing cycle training, community bike projects like Broken Spoke equip people with the skills required to navigate the city that exists, while imagining a better one.

Many community bike initiatives are motivated by environmental justice. Bike projects aim to increase bike use and reduce waste by recycling bike parts.The benefits of this go beyond the local area. Lower carbon emissions and improved air quality are some. Climate change disproportionately affects people of colour and the Global South bears the brunt of it. In the Global North, people of colour disproportionately live and work in industrial areas with high air pollution. 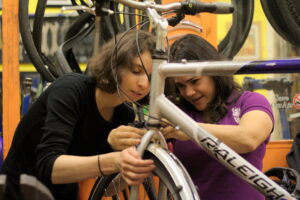 Cycle training is just one way in which Broken Spoke aims to empower people through sharing skills. Teaching courses on bike maintenance and the DIY open workshops are others. Creating spaces for people who experience marginalisation or disempowerment in other areas of their lives is (at minimum) a breath of relief for them, and (at best) gives confidence that spills over into other areas of life. Broken Spoke’s Beryl’s Night is an example of a space that is for women and trans folk. Examples of similar spaces are the LA Ovarian Psycos and London’s recent meet-up for women of colour at Look Mum No Hands. Although the focus of these different spaces varies, their struggles are not separate but intertwined. As Ibram X Kendi says, ‘we cannot be antiracist if we are homophobic or transphobic’ (2019, 197). As spoken-word poet Princess Peace explains, this is because we do not lead single-issue lives.

Giving people the skills to repair and ride a bicycle gives them personal mobility and autonomy, and potentially also economic mobility (that is, the capacity to do better for themselves financially than they would otherwise be able to). These principles are behind community bike projects that take the shape of Bikes for Refugees, The Bike Project and Broken Spoke’s Build-a-Bike scheme.

Community bike projects therefore have the potential to challenge oppressive economic structures. Black and minority ethnic people are far more likely to experience poverty than white people. There are many ways in which Broken Spoke aims to counteract this. It operates solidarity pay scales so that people with lower incomes can get the same service at a lower cost. Its workshop also supports cycle couriers and those in low-paid precarious employment within the cycling industry (including food service delivery) to maintain a bicycle cheaply – the bicycle being essential for their continued employment. Unusually, you do not have to buy a product in order to gain access to its premises and therefore it welcomes people regardless of their ability to consume. Some things it does for free, and other things you pay to use rather than to consume or purchase. These examples of alternative ways to use space and tools, and to employ people, show others ways to be antiracist in a hugely unequal city like Oxford.

The barriers and blindspots of community bike projects

Community bike projects tend to want to challenge structural inequalities – economic, racial and gendered – but they can be difficult to challenge. Here we describe some of the blindspots and barriers to antiracism, and suggest how to overcome them.

Bike projects often set up shop near town centres or main streets in popular areas. Liveable cities with open access are an aspiration but, in reality, cities physically exclude and confine people of colour. Take Oxford: the ring road creates an uninviting four-lane barrier between outer areas and the city centre. Since the areas on the outside of the ring road are less wealthy, accessibility for those who arguably most need a low-cost resource is restricted. In the last ten years of austerity, low income areas have become increasingly separated from other areas, and distinctly inhabited by minority groups.

However, bike workshops do not always have much choice over their location. They need to be located conveniently close to passing wheel-traffic to get custom, but also cannot afford to be selective over premises. Whilst community bike projects struggle to find affordable spaces in cities with soaring rent prices, they can simultaneously (and unintentionally) be a part of gentrification – a phenomenon which prices people (lower income, often people of colour) out of neighbourhoods as other wealthier people (e.g. young professionals, mostly white) move in. ‘Hipster’ neighbourhoods, which take over in a visible process of gentrification, often bring with them a distinctive culture – of which cycling is part.

It is important to be aware of the culture associated with cycling, which may be seen to be predominantly practised by affluent white people. Being inviting, accommodating (and even explicitly anti-racist) is not enough for people of colour to see the workshop as a space for them. Even if someone feels safe in a space, they may not feel it is their space. Safe spaces are essential, but it is also true that people respond to, and identify with, projects and spaces that are occupied by people like them. People of colour should be involved in decisions about how to manage behaviour and space so it is antiracist, without carrying the whole burden of making it so.

Whilst bike projects want to cultivate alternatives to consumer capitalism, cycling can be seen as an exclusive sport. Even users of these alternative spaces may own expensive bikes and gear, or they might commute as a lifestyle choice rather than a necessity. Taking up cycling usually costs a lot to begin with (e.g. buying a bike), but saves you money over the longer term. Setting up projects like low-cost bike exchanges, where old bikes are traded in or repaired, makes sure there are cycling opportunities for those less well off. In promoting cycling for all, bike projects must act with awareness that there are more barriers for some than others. Proactive outreach such as setting up community bike projects so they are accessible to people who have the most need to access them (e.g. a hub in more marginalised neighbourhoods and/or through outreach) requires resources often lacking from small projects. 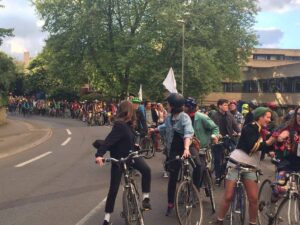 Although taking back our streets for cycling through critical mass demonstrations and cycling infrastructure is a good thing, the experience of cycling in the city isn’t the same for everyone. For example, it is much more likely for black people to be stopped and searched than white people, or accused of stealing bikes. In this case a bicycle doesn’t give a person autonomy but instead can be used against them.

We are strongly supportive of the work that community bike projects do to level the playing field for marginalised people, including people of colour. We also see that with more resources, and reflection, opportunities will open up to do better at this. One way to be an effective antiracist ally is to support community bike projects. Here’s how:

Achas Burin joined Broken Spoke as a volunteer five years ago. She is a PhD student and the co-founder of Alternative Curricula, a postcolonial and decolonial reading group.

Christabel Buchanan used to work in community bike projects in Tottenham and Barking in London. She now works for CAG Oxfordshire.