The radio was playing when I got home last night. I’d been at the workshop til late teaching a wonderful group of women how to fix their bikes. It took me a moment to tune into what was being said, but a couple of trigger words – making, community, workshop – caught my attention. A voice said, ‘…we need to row back from a consumerist society where people know nothing about the machines and materials they use…’ – Yes! You know when someone articulates exactly what you’ve been thinking? For years people have been asking why I’m so in to fixing bikes, yes I love cycling, using my hands, and encouraging active sustainable transport but there is something more to it which I’ve never successfully been able to explain. Now someone speaking out of the radio was laying out my whole philosophy of why I teach and do bike maintenance.

The show was Life Scientific on Radio 4 and the person speaking was called Mark Miodownik, founder of the Institute of Making at UCL. His idea is that making is a form – a central form – of human expression, and that by shutting ourselves off to how the stuff we use works and how to make it we are shutting off a central part of who we are and where we came from. When I started learning how bikes work and how to build and mend them it changed the way I understood the world; the principles of physics came to inform the choices I made (even if I could not articulate them), and I looked and thought about materials – not just how they behaved but simply engaging with the fact that stuff was made from materials. My new understanding gave me this revolutionary power to make and repair stuff, I could look at something that didn’t work, puzzle out what was wrong, and then fix it. I learned these things because people shared their knowledge with me, I was able to spend time in workshops and use tools. In our fast and thrown away culture which is focused on writing, reading, and saying as the main outputs of work, fewer and fewer people have access to spaces where they can make stuff. Broken Spoke and other projects like ours including Oxford HackSpace are part of what Miodownik called ‘The movement to bring tools and making to peoples lives’. We exist because of the passionate decided efforts of volunteers and workers who believe in the importance of having a physical space in our communities where people can learn from one another to make and fix things.

Why does it matter if we have a laptop, phone or bike for a year then throw it away? I’m paraphrasing Miodownik, because he said brilliantly: It matters because it’s an expression of our values. If we value making rather than buying things, we can express ourselves through the stuff we make, and if we value making we will value maintaining or recycling things – returning to a culture of making is an opportunity for creativity and sustainability to thrive. Why outsource making to factories halfway across the world, and in our disconnection from things view them as disposable? Why allow big corporations to decide what we use, how it looks, and how long it lasts? We need to reclaim making for ourselves and the planet, and to do that we need community workshops like the Broken Spoke – so come and get involved! Let’s get a workshop in the heart of every community! 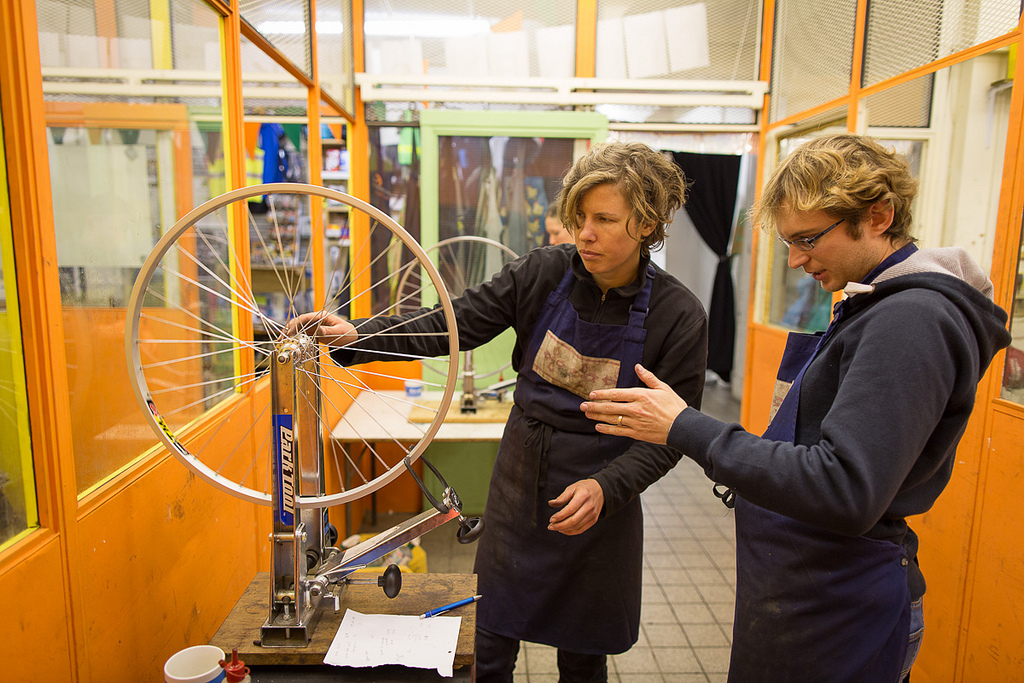