“Have done almost 8 hours of travelling in total to spend one hour at Luton County Court today. But then this also meant I (unexpectedly) got to pick up a box of Alphonso mangoes. Totally worth it now.”

“I miss you and mangoes. Mainly mangoes. But, you know, also you. xx”

“Come and visit me in Bristol. If you come in the next two weeks there might even be mangoes…”

I can cycle there. I’ve done almost that far before. No problem. 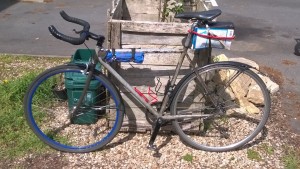 Perhaps this was a bit brash. To start with, the entire cargo capacity on my bike consists of jersey pockets. No racks, no panniers, barely even a braze-on to work with. This is fine for a day trip; a weekend is not so easy. But volunteering at the Spoke has taught me how to improvise; a sponge-bag, a couple of toe straps, and a bungee cord later, I’ve got a saddle bag big enough for a pair of jeans, a couple of changes of underwear, some fresh socks, and a toothbrush. What more could you want for a weekend? 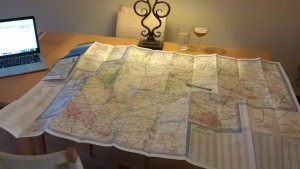 Next thing was route planning. Normally for me this is involves a hasty look at google maps and some bad memorisation. I knew this wasn’t going to cut it this time – an unintentional detour isn’t too bad over a moderate distance – sometimes welcome, even – but turning 75 miles into 90 due to bad planning isn’t something I wanted. Thankfully, we’d covered route planning at Beryl’s Night just the month before, so I had plenty of good advice to go on. A GPS route for my phone and an OS Tour map later, I’m well prepared.

Saturday morning, 4am, I sneak out of the front door, bumping into a housemate coming in after a night out. She comments on this later, exclaiming my dedication to cycling. Really though, it’s my dedication to avoiding traffic, and the excitement of visiting old friends and new places.

It’s cold as I push my way out of Oxford, rubbing my eyes, trying to keep them open. Striding down next to the dual carriageway, I’m a little bit nervous. The darkness makes it impossible to judge how far I’ve come, and the world feels empty, my only companions being the lorries lumbering alongside. I’m comforted by them somehow. Perhaps it’s subconscious proof that the road does go on, that there are fellow travellers out there in the black; maybe they just break the monotony of a cycle path that all looks the same. I force myself to concentrate on the road, barely managing to avoid the rabbits which dart out in front of my wheel, desperate to get back to the safety of the hedgerow. No-one told me about this particular peril of night-riding.

The darkness gives way to a dull orange glow, streetlights humming as I pass through Witney. I get strange looks from people on their way home from a night out as I rumble past with a cheerful ding ding! ‘Weirdo…’ I imagine them muttering to each other (probably right). These will be the last people I’ll see for a while; it’s small country lanes from now on. 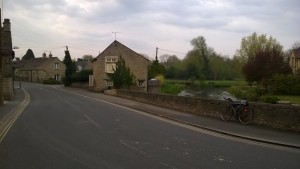 Small villages and towns mark my way, all looking too similar, but each different. The sleeping hulk of Brize Norton dominates my thoughts as I skirt around Carterton, the barbed-wire fence an unsettling sight. Filkins is on the wide open field. Southrop has thatched cottages and burbling streams. Fairford with little Chinese takeaways and the Bull on the river. In Cerney Wick a ‘Road Closed’ sign blocks my way, but the bridge is clear. Malmesbury twists up and down, winding between narrow stone walls – I cross the Avon for the first time here, and stop for a picture. I decide that this marks a division; no longer heading out, I’m heading in now.

Signs for National Cycle Route 254 guide me as I start to climb up across the Cotswold Hills, just as the traffic starts to pick up. The bliss of a car-free stretch. I begin fly as the temperature rises; I’m more than half-way. Blasting down Fosse way, the Roman road, it’s strange to think this was once a major thoroughfare. On my normal rides, criss-crossing my way through Oxfordshire, I’m used to passing back and forth over motorways, those huge fissures carved through the land reminding me that my method of transportation is rather small in scale. But this road is something different. It’s just as long as its modern equivalent, not as wide of course, but somehow more elegant. It doesn’t cut through the landscape, it’s a part of it. It gently waves, but never wavers, my bike practically riding itself through its curves (half thanks to modern tarmac no doubt). I’m 2000 years apart from its creators, but it feels like it was made just for me. 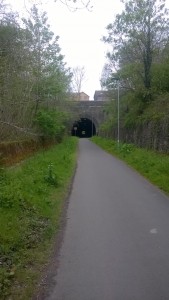 Peeling off the cycle route, I’m onto the last few stretches of rural B roads, growing heavy with the Saturday morning rush. Four-by-fours pulling horse boxes buzz along, a constant yawn in the background. The physical strain on my body is replaced with the mental drain of traffic. Constant shoulder-checking to keep an eye on the cars behind me breaks my concentration, and I struggle to keep up my momentum as the road surges up and down. My only consolation is how close my destination is now.

At last I pull clear of the traffic, and onto the cycle network surrounding Bristol. My GPS is useless now, but the signposts guide my way. Bombing down into the city along the Bristol and Bath Railway Path, I’m racing to the finish. It’s cold in the Staple Hill tunnel, water raining down, a third of a mile of disused, now re-purposed, industrial past. The last little stretch through the city centre throws a bit of familiar urban cycling at me – a last burst of energy helping me keep pace with the double deckers – before the final climb up to Clifton to my destination. Blazing sunshine is there to greet me as I climb out of the saddle for the last time today and head in for my first cup of tea for the day. 76 miles, all before brunch. Perfect.

In case you were wondering, I was too late for the mangoes in the end (large quantities of local cheese and cider proved a suitable substitute though). We managed two full days of sightseeing over the weekend, taking in Clifton Suspension bridge, Bristol Museum, Cabot tower, St Mary Redcliffe, as well as too many little shops, restaurants, coffee shops, and bars to list here. I tried to visit the Bristol Bike Project, but they were closed when I got there unfortunately (I did manage to help someone out with her bike while waiting outside though, lending a spanner to attach a bike-trailer hook – she laughed when I said I was from a similar project in Oxford!) 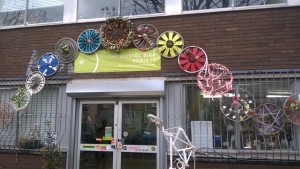 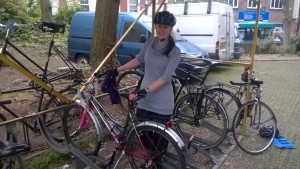 I’d definitely do it again, perhaps taking a bit more time over everything – a full day for the journey at each end, and a week’s stay perhaps. Of course, the beauty of cycling is that the travel is part of the fun. The return trip was along a similar route, again leaving in the wee hours to get out of the city before the traffic started. It was a bit more of a slog than the journey there, my legs weary after the full weekend’s activities. My mood was more subdued on the journey back too. The ride out to Bristol felt like an adventure; coming back is sad in reflection, the open road having a well defined end in front of me. The feeling didn’t last for long. First thoughts on arriving home: Where next? 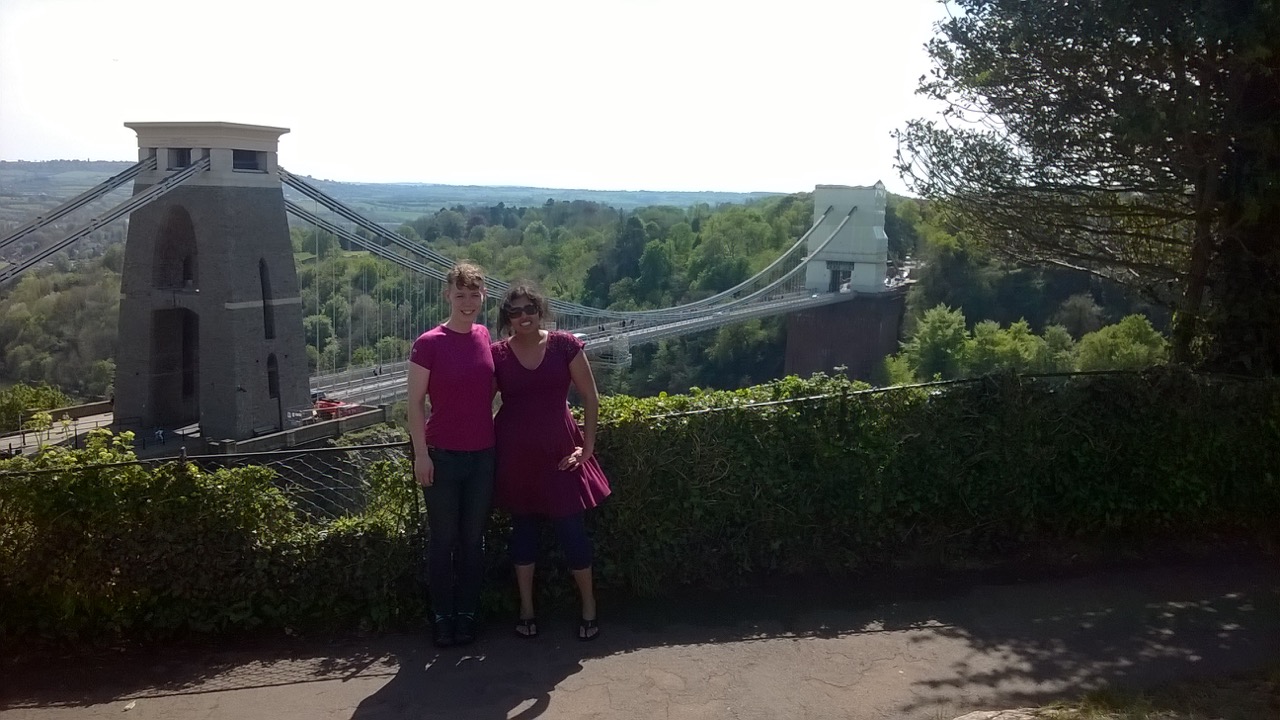 The cover photo of a mango up close is based on this brilliant photo found on flickr.